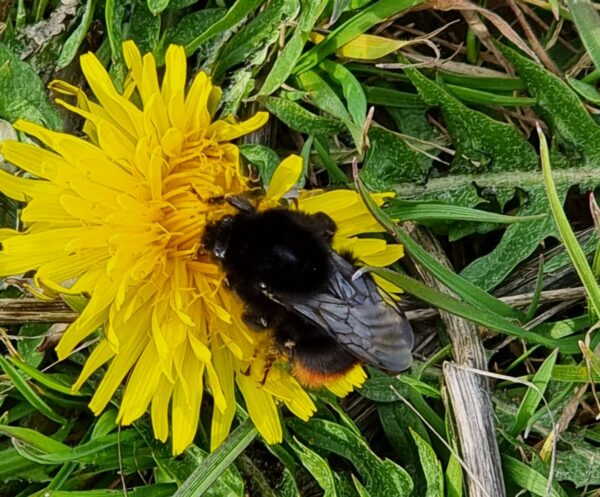 When people think of pollinators, they tend to think mainly of bees. But that is doing all the other pollinators a disservice! Many insects pollinate plants when they move around your garden or in the wild – flies, beetles, ladybirds and even the dreaded wasps! Although they are more concerned with finding nectar, many insects will carry pollen around with them as they go from plant to plant. Bees are the pollinators that first spring to mind, and, being as they gather pollen to take back to their nests, bees are generally the most effective pollinators, visiting many more flowers and carrying more pollen between them. But there are other pollinators who deserve some credit too!

Focusing on the poor maligned wasp and its bigger mate, the hornet, it is important to realise that they are an important part of the ecosystem – even though summer picnics ruined by them flitting about everywhere and their potential to sting would lead many people to disagree! Yet they control the numbers of potential pests like greenfly and many caterpillars. It has been estimated that the social wasps of the UK (which includes hornets) might account for 14 million kilograms of insect prey across the summer. If there were no wasps, crops would suffer greatly from insect damage – which in turn would lead farmers to use more pesticides, creating more ecological damage.

Ladybirds do not actually require nectar and tend to eat it as an addition to their diets. They are mainly on flowers searching out insects such as aphids. Their movements on the plants inevitably result in them getting a dusting of pollen which they carry to other flowers when they land on them.

Beetles are the largest collection of pollinators, simply because there are so many of them and so many species. There are more than 300,000 species of beetle worldwide, comprising about 40% of known insects. Beetle-pollinated plants have a few distinctive characteristics, such as large cup-like flowers that are typically open during the day, heavily-scented flowers, and tough petals and leaves (to withstand the biting through that some beetles do to access the pollen in some flowers. Preferred flower colours are white (as evidenced by the many soldier beetles, for example, on Wild Carrot!), cream, pale green and burgundy. They rely, though, primarily on their sense of smell to locate flowers, rather than the colour. Flower beetles are mostly interested in pollen as a food source so the plants they visit must produce enough pollen to ensure some is left over for pollination to occur. Beetles do not have any special body appendages for picking up pollen; pollen grains just stick to their bodies as they move from flower to flower.

Hoverflies may not be able to carry as much pollen as bees, but they can fly greater distances than bees and so take the pollen further. Like ladybirds and wasps, they are good pest controllers, with both adults and larvae having a voracious appetite for aphids and other garden pests.

Pollinators are, therefore, a vital part of our survival on earth. So much of what we eat is pollinated by insects and even plants we don’t eat are reliant on them too for survival. We have omitted to mention, though, that birds, bats and other creatures are also important pollinators in their own way. For example, saguaro and organ pipe cacti in the desert rely on nectar-feeding desert bats for their pollination. The cacti in turn are important nesting and perching sites for many desert birds. Pollinators are so vital to all species that we must do our best to help them by growing the flowers they love, whichever country we live in!

%d bloggers like this:
We use cookies to ensure that we give you the best experience on our website. If you continue to use this site we will assume that you are happy with it.Ok