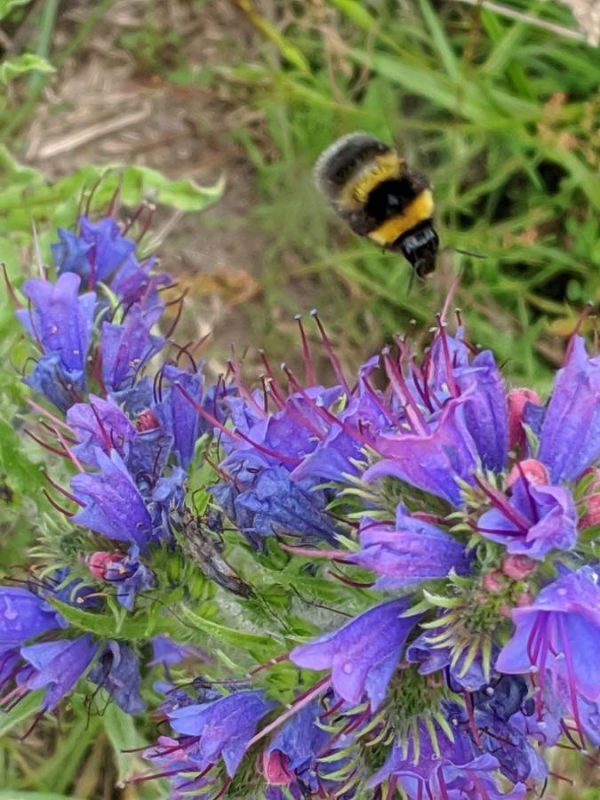 This week I was very lucky to go out with other like-minded folk from the Bumblebee Conservation Trust to count bumblebees.  What a lovely way to spend a Monday!

We met at the RSPB Dungeness nature reserve at 10.15, a rendezvous I was late for but as everyone was still drinking coffee and eating biscuits, I was relieved of any guilt!  We were divided up into groups and given our destinations for counting the bees there and recording the species found.  My patch, with a nice chap called Geoff from whom I learnt a lot, was Kent Wildlife Trust’s Romney Marsh Visitor Centre.  Unfortunately the weather was not on our side and a large patch of Comfrey which would normally ensure good numbers was notably devoid of bees due to the overcast conditions and then rain.

A wander through the garden at the Visitor centre yielded similar lacklustre results, seeing only about 4 garden bumblebees, despite there being flowers there that bees love – Viper’s Bugloss (in absolute abundance this year at Dungeness and New Romney), Lavatera, Bramble flowers and so on.  We also caught a fluffy carder bee who was happy to pose for a few seconds for a photo before he was released back on to Viper’s Bugloss.

We sat in the car for 20 minutes for the rain to stop but it didn’t so we trudged off back to Dungeness for lunch.

After lunch we headed off to the Warren at New Romney, an old gravel pit which is now a restful lake (although the noise of the traffic rather spoilt the idyllicness a bit).  This was a much better afternoon of bee-counting.  The sun was out and so were the bees.  It was hard to imagine that hundreds of years ago the sea came right up to this point.  The Warren also got its name from the old rabbit warren that still exists there.

We counted a number of bumbebee species – white-tailed, red-tailed, carder, garden, tree.  We also walked through a field alive with Marbled White butterflies.  Unfortunately the field owner had chosen to destroy all the thistles in the field – which the bees love.  So there were not many bees to be seen and only the odd thistle here and there which had escaped execution.

It was a most enjoyable day and I learnt one particularly interesting fact – that bees can be bleached by the sun, so instead of yellow and black they are more like a pale cream and black.  fascinating!