A Tale About the Wild Cornflower – centaurea cyanus 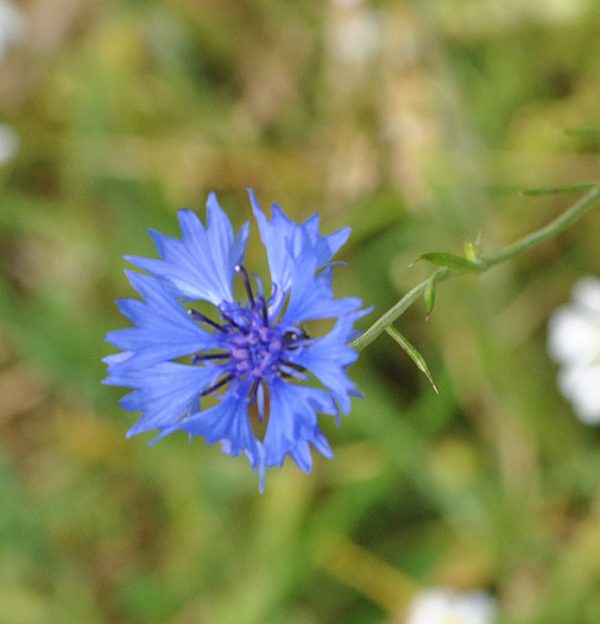 The Cornflower is  a beautiful little blue wildflower.  Where it was once abundant, growing wildly in cornfields, the Cornflower is now a rare sight in the wild.  It was regarded as a weed (can you believe that!) and blunted sickles during harvesting and so farmers did their best to eradicate it.  Indeed, it was often referred to as Hurt Sickle.  As with many wildflowers, it has a number of old folk names – Bluebottle, Batchelor’s Button and Knapweed.

Its pretty blue flowers grow on stems up to 2 ft (60 cm) high and butterflies and bees love it.

Its Latin botanical name centaurea derives  from the name Chiron, the centaur in Greek mythology, whom the  plant cured when an arrow tipped with the blood of Hydra wounded him.  Since then the plant has been assumed to drive away snakes.  The cyanus part comes from Cyanus, a young man from Greek mythology, who loved the plant so much he spent all his time in corn fields making garlands from them.  When he died, the goddess Flora transformed him into the plant.  However, the name may also come from the nymph, Cyane, daughter of the river god, Meidanros – she was changed into a dark blue spring whose waters fed the small brook Anapis near Syracuse.

There is much folklore surrounding the Cornflower.  People used to believe that the sky had sent down bits of itself to the fields and that’s why they were scattered with blue flowers.  Cornflowers can stop a nosebleed if picked on Corpus Christi Sunday.  Water distilled from Cornflower petals was used for weak eyes.  Petal juice will dye linen blue but isn’t permanent.  Stagecoach drivers used to wear Cornflowers as buttonholes in the nineteenth century.  The flower was also symbolic of rustic life.

How to Grow Cornflowers

Cornflowers bloom from June to September.  They are very easy to grow!  In May,  find a patch of bare soil in full sun and scatter on the seeds.  Press them lightly into the soil and water.  Keeop an eye on them and water when necessary.  They will germinate within a week or so.  You could also scatter them on bare spaces between other plants (as long as they get enough light and sun), so that you have a drift of blue.  The bees will love them!

Cornflowers are one of the wildflower components in our cornfield annuals wildflower seed mix, which is our most popular seed packet mix. They are the perfect match for the Poppies, Corn Chamomiles and Corn Marigolds that are also in the mix.

*This is provided for information only and is in no way a  prescription for use.  Please seek the advice of a qualified herbalist before using*